The Joy of Missing Out: How Then Shall We Live in a Wired World?

An excerpt from Christina Crook’s new book, The Joy of Missing Out: Finding Balance in a Wired World.

A painter takes a pause before he starts a stroke, hand hovering inches from the sheen of canvas, as if in prayer. And then the lines begin, the black of oil unfolding an inner blueprint. The outline comes quickly; it’s a matter of minutes before he shuffles a few feet back to take in the full view.

It’s the after-work that’s painstaking. The palette, shadows, and spaces for light. The smudging, resin, thickened layers giving the subtle sense of an ocean’s tide. And in between, the mistakes. The lines unintended, the colors not right; but with them he moves onward, drawing them into the finished work. And, at some point, he says: It is finished. When, of course, it never is.

The metaphor of composing, and with it the improvisation essential to a painter or musician, is a proper one for life. “It allows for variety, mistakes, and change over time,” writes Trudelle Thomas in her book Spirituality in the Mother Zone. It allows for “forgiveness and fluidity.”

None of us has been a bystander in the digital age. The seas have swept us all, caught in a surge of information and entertainment too good to pass up. And now, here we are washed ashore, a bit ashamed, unsure of our footing as we rise to walk on altogether different terrain.

“Everything good I’ve ever gotten in life, I only got because I gave something else up.”—Elizabeth Gilbert, Eat. Pray. Love.

The Power of Habit 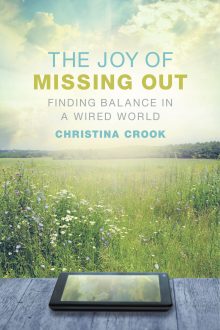 “All our life, so far as it has definite form, is but a mass of habits,” William James wrote in 1892. Most of the choices we make every day may feel like the
products of well-considered decision-making, but they’re not. “They’re habits,” writes Charles Duhigg in his New York Times best-selling book, The Power of Habit. “And though each habit means relatively little on its own, over time . . . they have enormous impacts on our health, productivity, financial security, and happiness.”

It’s only over the past 20 years that scientists and marketing experts have begun to really understand how habits are formed and how they can be changed. As we take on a new set of habits, says Duhigg, one set of neurological patterns—our old habits—are overridden by new ones. The neural activity of our old behaviors are crowded out by new patterns. As our habits change, so do our brains.

We might already know about this, yet still we reach for the phone in our pocket 20 times a day. The good news is, the habits we have—even compulsive habits we have formed online—can be redirected. We can override them with new habits.

But we must begin with one.

In his chapter “Why We Do What We Do,” Duhigg recounts the story of Lisa Allen, a 34-year-old woman who had started drinking and smoking when she was 16 and had struggled with obesity and holding down a job for most of her life. When Lisa’s husband left her for another woman, she flew to Cairo on a whim and there, jet-lagged in her hotel room, she accidentally lit up the end of a pen and tried to take a drag.

Lying in bed, she broke down. “I felt like everything I had ever wanted had crumbled. I couldn’t even smoke right.” This moment touched off a transformation.

“I need a goal,” she thought. So, she chose one. To come back to Egypt and trek through an unnamed desert. “It was a crazy idea, Lisa knew. She was out of shape, overweight, with no money in the bank. She didn’t even know… if such a trip was possible. None of this mattered, though. She needed something to focus on,”  writes Duhigg. “And to survive such an expedition, she was certain she would have to make sacrifices. In particular, she would need to quit smoking.”

It was Lisa’s focus on changing one habit that set off the shift, helping her reprogram the other patterns in her life as well. She was changing a keystone habit.

The human brain is very adaptive. If you repeat a behavior enough times, synaptic pathways get worn in. “It takes 21 daysto form and break a habit,” is the standard thinking. But new pathways aren’t forged in an exact number of days. Everyone’s brain is different, and habit formation relies on a variety of aspects including life experience and personality. And it’s universally true that it’s easier to start a habit than break it.

The one thing we know for sure? We have to start somewhere.

To proclaim technologies such as tablets, smartphones and television as neutral tools flies in the face of how people behave.

“Why do 90% of all families or households watch television after dinner? Is it because they decided that that’s the best way to spend their time?” asks philosopher Albert Borgmann. “No, something else must be going on. And what’s going on is that the culture around us—including work that is draining, food that’s easily available, and television shows made as attractive as some of the best minds in our country can make them—encourages us to plop down in front of [the screen] and spend two hours there.”

And the hours only continue to increase.

To quote Flannery O’Connor: “You must push as hard as the age that pushes you.” If we want a different, richer quality of life, then we have to push as hard against the pull of the most desirable technologies available to us. But most of us simply don’t have that much discipline. I know I didn’t. It’s why I had to step off-line for 31 days. And I still don’t have the discipline I’d like, even after my extreme act of ditching the Internet.

There is a certain starvation of spirit caused by conflicting commitments, shortage of time and demanding work. We need enough imagination to envision a life beyond this labyrinth, to break our habits. Like Lisa Allen and her trip to Egypt, we must will something new.

But, as Ronald Rolheiser points out in his book The Holy Longing, most of us want the best of both worlds:

“We want to serve the poor and have a simple lifestyle, but we also want all the comforts of the rich; we want to have the depth afforded by solitude, but we also do not want to miss anything; we want to pray, but we also want to watch television, read, talk to friends, and go out. Small wonder life is so often a trying enterprise and we are often tired and pathologically overextended.”

Medieval philosophy had a dictum that said: “Every choice is a thousand renunciations. To choose one thing is to turn one’s back on many others.”When we choose to simply dwell in a moment, not capturing it digitally or sharing it with an audience, we are choosing to trust our own memory. When we take a thousand selfies, we are choosing to discard our humility and modesty. When we log off for a weekend, we choose to ignore a million bits of news.

Each time we choose reality, we turn our backs on virtual reality. In choosing to visit the lonely, we say “no” to the need for robotic replacements. People or Pinterest. Humans or Hoodoo. Friends or Facebook. Engagement or escape. Marriages or machines.

Every choice is a renunciation.

The moment that changes everything is the moment we wake up to the truth that we have to give up something to accomplish our goal. We must renounce to gain.

I confess that I can click around on the Internet with the best of them. I do it a lot—even as I write this book. And then there I am, an hour later, with nothing to show for it—and I’m paying someone to take care of my kids! And I am supposed to be good at this stuff.

I reinstall the Facebook app on my iPhone so I can share some pictures with my far-flung family and friends, and seven days later I catch myself checking my newsfeed for the 17th time that day, and I have no choice. I must delete or perish at the hands of Zuckerberg. And each time I do, I realize how little I need it.

“Discipline is the path to freedom,” writes Anne Lamott. “This is another thing I hate, as I am drawn to sloth and over-consumption, and squandering whatever time I have left. But it is true, I promise. Discipline frees our spirits.”

Or, to put it in Bible terms: “Whoever loves discipline loves knowledge, but he who hates reproof is foolish.”—Proverbs