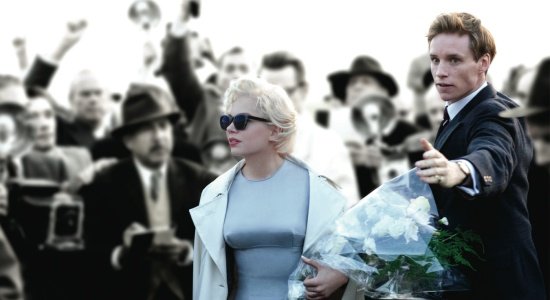 The genius of Marilyn Monroe was that she never appeared to be trying. Whether delivering a saucy punch-line, uttering breathy come-ons or cooing and slinking her way through a seductive musical number, there was never a sense of performance. She simply was, seemingly happening upon her dialogue and tantalizing body language through some kind of divine inspiration. Under the watch of master directors like Billy Wilder (Some Like It Hot, The Seven-Year Itch) or Howard Hawks (Gentlemen Prefer Blondes), she was an unstoppable force, rendering those on-screen around her invisible. Even junky, hopeless material couldn’t suppress her radiant talent. In the feeble final Marx Brothers comedy Love Happy she managed, in a mere sliver of screen-time, to upstage renowned scene-stealer Groucho Marx – a feat few mortals would dare attempt, much less accomplish.

Now, almost fifty years after her untimely death, she dominates the screen anew – courtesy of sublimely talented conduit Michelle Williams – in My Week with Marilyn, a so-so coming of age/showbiz drama that squeaks by on our affection for the fallen icon. But just barely. Based on the (rather dubious) memoirs of documentarian Colin Clark, the film highlights one turbulent key week in the starlet’s life, during her 1956 stay in London shooting The Prince and the Showgirl under the strict direction of lauded thespian Sir Laurence Olivier (Kenneth Branagh).

Acting as our avatar into this exciting moment in cinema history is Colin (Eddie Redmayne), the gawky “youngest in a family of over-achievers,” who scores an (uncredited) 3rd assistant director gig on the The Prince after procuring lodging for Monroe following a production setback. Starry-eyed and naive, but motivated by an unquenchable love for filmmaking, the aspiring artist has a prime seat in the eye of the hurricane as Monroe frolics into town and plunges the set into chaos. Accompanied by her maternal acting coach Paula Strasberg (Zoë Wanamaker), the insecure, ill-prepared star quickly draws the ire of the classically-trained Olivier, who has zero patience for America’s new Method approach to acting. He wants only to harness her boundless charisma as a means of reigniting his dusty screen image.

As tension builds, and the production is put on hiatus, Colin unintentionally winds up becoming Monroe’s confident, and partner in a chaste quasi-romance. This irritates many of the power players, including the actress’ protective, seen-it-all press agent Milton Greene (Dominic Cooper). However, as her brand new marriage to playwright Arthur Miller (Dougray Scott) becomes strained, Marilyn begins to spiral into an abyss of pills and drink. While Olivier struggles to maintain control of his picture, and frets over whether his main attraction will be able to bring the necessary on-camera fireworks, Colin fears that the sweet girl he’s come to love will be consumed by the fog of depression hovering around her.

As the tragic blonde bombshell, Williams is an unlikely, yet wholly convincing choice. With her delicate, angelic loveliness and quiet, melancholy, she’s a pro at inhabiting damaged souls – recently evidenced in Shutter Island, Blue Valentine or this year’s frustratingly enigmatic misery-western Meek’s Cutoff – but here she also embraces, and owns, Monroe’s bubbly erotic innocence. Although the actress doesn’t exactly look like the legend, it’s often astonishing how fully she disappears behind her subject’s endearing wide-eyed stare and come-hither vocal mannerisms. She nails a musical opening, lip-synching the sultry lyrics of “Heat Wave,” and flawlessly channels Marilyn’s magnetic ability to work a room in a wonderful scene set at a press conference. But it’s the small moments that really sell the illusion, like how she teasingly calls to Colin from a bubble bath, telling him to “Wait a while, crocodile,” or how, even at her lowest, coy amusement flickers in her dazzling eyes. It’s a tough task, to avoid the perils of pure imitation, but Williams manages to create not an idealized carbon copy, but a fully-realized human being with dreams, fears and deep emotional wounds.

Sadly, Williams’ revelatory work is at the service of an underwhelming screenplay. There are compelling stories to be told in My Week with Marilyn, but very few of them have anything to do with Colin Clark. Redmayne, with his leering eyes, vaguely reptilian features and smarmy social-climber air, is a tepid nonentity of a lead, with all the charisma of watered down oatmeal. The character obviously serves a necessary function, providing us access to the film’s truly intriguing figures, but his by-the-numbers, dramatically inert character journey dominates so much of the run-time it threatens to topple the picture into the bleary dregs of Blandsville.

The remainder of the cast is on-the-ball, albeit criminally underutilized, with many vanishing from the picture by the halfway point. Dame Judi Dench is a sweet, funny joy in her handful of scenes as actress Dame Sybil Thorndike, the set’s loving mother figure who goes out of her way to make Marilyn feel welcome, and Julia Ormand portrays Vivien Leigh with striking elegance and humanity. A warm Emma Watson is wasted in a go-nowhere part as a costumer who catches the attention of Colin. Though she at least gets some resolution, unlike Toby Jones’ cynical publicist Arthur Jacobs, who barely even registers as a character. Only Branagh’s role has any meat, and he relishes digging in. A pompous tyrant on set, Olivier is at his most poignant when he sits in the dark, silently watching daily rushes, and admitting – in a voice both mournful and wondrous – that Monroe makes everyone else on-screen look “permanently ten feet under water.”

Helmer Simon Curtis directs with unflashy restraint, enlivening the proceedings through subtle visual tricks. He frequently lights Williams more intensely than her co-stars; a nice shorthand for emphasizing just how much brighter Monroe’s star shone than those around her. Additionally, Colin and Marilyn’s two most important meetings are set in idyllic pastoral environments, and he and cinematographer Ben Smithard do a nice job creating gorgeously serene natural paradises that complement the exquisite natural wonder of Monroe herself.

Ultimately, though, My Week with Marilyn is the most frustrating kind of film; one with limitless potential, a fascinating historical background and a crackerjack lead performance, which takes the easy road, settling for shallow whimsy and safe, unimaginative storytelling. No film about this captivating, eternal sex symbol – who created an invigorating, vivacious stir wherever she appeared – should be this flimsy, tame and, frankly, forgettable. In the playful parlance of Marilyn herself, it’s too much whoop-dee-doo, not enough boop-boop-a-doop.