The ethical consumer has become a staple of the market. The locally-sourced, fair-trade, grain-fed, free-range, organic, conflict-free options on offer in every retail sector suggest that a good number of people are realizing that their purchasing choices are an opportunity, if not a responsibility, to make a difference in the world.

But, if consumers are recognizing this inherent responsibility, should not producers be at least as mindful? So said Mark Bubb, the national marketing director of Made for Good and Jedidiah Clothing. “So much money is being made in industry that we feel that industry is just as responsible for the world as individual people.”

Jedidiah Clothing is a street and surf apparel company that partners with a charity each season and donates their profits to that organization. It has been a pioneer in a new generation of companies that are both for-profit but also for-social-good. For over a decade, they have been using a business model called “embedded generosity.” This model has been so successful that a group of like-minded brands have recently gathered under the label Made for Good. This new consortium promises all of their products use a recurring model of giving through their partnerships with non-profits. 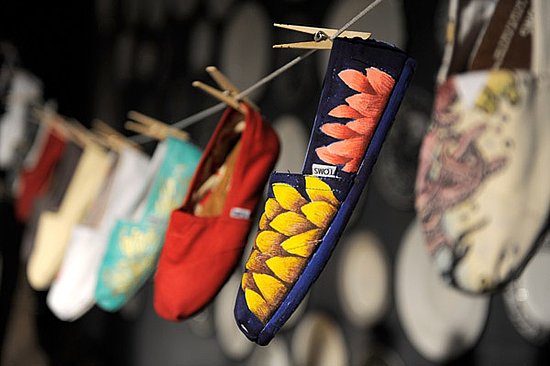 When you buy a Made for Good product, Bubb explained, you are also supporting a good cause. But unlike other versions of charity purchasing, in this model your support doesn’t cost the consumer any more. “Instead of the consumer making a contribution in an increased price, we are taking that percentage from our bottom line and putting it towards the organizations we are working with.”

Another company using the concept of embedded generosity is the enormously popular shoe manufacturer, TOMS. On their website they describe themselves as “a for-profit company with giving at its core.” For every pair of TOMS shoes or glasses that are bought, the company donates another pair of shoes or eyeglasses to people in need. The company refers to the people who buy their products as ‘benefactors’ or ‘customer-philanthropists,’ rather than ‘customers.’ Their strategy seems to have been successful: by last year, TOMS had already donated over one million pairs of shoes to needy children worldwide. Like Jedidiah Clothing, TOMS has found that they are simply able to do more good as a for-profit company than as a non-profit organization because they can use sales instead of fundraising to support their giving.

But is a customer-philanthropist an oxymoron? Is it simply a marketing move to capitalize on people’s sense of social responsibility and self-worth? “There are a ton of [companies] out there that are doing it because it is the right thing to do,” Bubb said.

“They honestly have good intentions in their heart and they want to do something positive.” He did admit that embedded generosity is a good PR strategy, and that a lot of companies are getting on board because of that. However, he notes that even this might not be negative because consumers will continue to drive the market by pushing companies to do what they think is the right thing.

“Do you remember when people started to recycle?” Bubb asked. He explained that doing something to make the world a better place made people feel good about themselves and now it has become a popular and socially responsible practice. Bubb said that this is the way people will begin to think about purchasing. He does not expect the market to change completely overnight but said, “I think embedded generosity companies are going to grow and are here to stay.”

“There are so many businesses and products out there that can lend themselves to this kind of idea. I think the general population of consumers are going to get to the point where if they are buying something that doesn’t have a positive aspect they are going to look at it and ask, ‘why would I buy that?'”