More specifically, Advice from a Rock Star on How to Interview a Rock Star.

Not going to lie… I’m nervous about this upcoming interview with Derek Webb.

I mean, in the first place, what if he’s an ***hole? I’m not calling him one preemptively, by the way… don’t get mad, Derek Webb, if you’re reading. I don’t have any reason to expect that he will be. But you know what I’m saying — fame gives artists the out they’ve always wanted from social decorum. If he wants to be a jerk, he can be. I’m sure he’s aware that the Christian reading public is not going to want to believe that a famous Christian singer was distant and dismissive on the phone.

So my lizard brain is spinning around the idea of how to disarm him. What conversational techniques result in successful rock journalism?

As it happens, I know one of these. A real live one. Grammy Awards, platinum albums, 8 months of the year on tour, documentary films… Sometimes he wears sunglasses where they are uncalled for.

He’s also a very warm and kind-hearted dude. So when I asked him for some advice on how to approach this interview, he obliged.

I’m sure it will go really well, you are an easy person to talk to and you always make people feel comfortable around you. 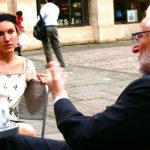 Interviewing Stanley Wells (a different kind of rock star) in 2007. Chelsea will be interviewing Derek Webb later this month for Converge Magazine’s March/April issue. Follow her on twitter @thechelseagrin.