It’s easy to mistake 2011 as a weak year for cinema. After all, how else should one sum up a year that had few universally acclaimed masterpieces-in-the-making or zeitgest-altering blockbusters? A year that will likely lead to Michel Hazanavicius’s adorable, but inconsequential, The Artist nabbing the top prize at the 2012 Oscar ceremony?

However, scanning over the 90+ releases I saw in 2011, I’m surprised at how consistently good – and occasionally great – the output actually was. The sizable number of commendable efforts actually made it significantly tougher to assemble this list than in the past; there were so many titles I tried valiantly to sneak on without success. While you might disagree with a few (or all) of my final choices, think about how nice it is to have a rare year where all the Top 10 lists aren’t boring carbon copies of one another.
Now, without further adieu, my Top 10 Films of 2011:

1) The Tree of Life – Terrence Malick’s ambitious, awe-inspiring head-trip through the Big Bang, life, death, religion, childhood and 1950s suburban America daringly endeavours to unlock the mysteries of the universe through cinema. More metaphysical visual poetry than clear-cut narrative, The Tree of Life certainly isn’t for everyone. But for those interested in delving into its gorgeous, unforgettably epic sights and sounds, subtle performances – from Brad Pitt, Jessica Chastain, Sean Penn and Hunter McCracken – and heady concepts, it offers an immersive, unrivalled spectacle that reveals powerful new insights, both filmic and intensely personal, with each revisit. Malick has fashioned a film to interpret, debate, dissect and hold dear; it respects the intelligence of the audience, and rewards active participation. An enthralling culmination of the reclusive helmer’s career-to-date – combining the intimate, small-scale storytelling of his 1970s efforts, Badlands and Days of Heaven, with the dreamy, reflective philosophical musings of his more recent The Thin Red Line and The New World – The Tree of Life operates on the grandest of scales and will, without a doubt, continue to amaze, frustrate and challenge cinephiles well into the foreseeable future.

2)  War Horse – Alfred Hitchcock famously declared that he loved to play the audience like a piano. With War Horse, a captivating period tale about a majestic horse named Joey navigating his way, owner by owner, through battered WWI Europe, renowned director Steven Spielberg masterfully tickles every finely tuned, spellbinding note in his arsenal, conducting an impressively potent orchestra of wonder, joy, horror and, of course, tears. Inspired by the classical filmmaking of John Ford and David Lean, War Horse is sweepingly picturesque, deliberately paced and refreshingly old-fashioned in its approach to melodramatic emotion and thematic messages. Spielberg again richly tackles the torments of war – nobody else captures on-screen combat with such virtuosity – while also underscoring the heartbreaking irony of mankind’s contradictory relationship with animals; using and abusing them to meet our own “civilized” needs, yet still depending on them to fill our human yearnings for hope, friendship, courage and love. It’s a special film that wears its heart on its sleeve and speaks directly to the soul of the viewer.

3)  Hugo – I’m not exactly sure which children Martin Scorsese’s marvellously peculiar, sumptuous 3D celebration of golden age silent film was aimed at, but we should all be thankful Paramount agreed to bankroll it! A whimsical sensory feast, “Hugo” chronicles the exploits of its titular hero (Asa Butterfield), an orphaned clockmaker, secretly living in a bustling 1930s Paris train station, who becomes entangled in the life of disgraced pioneer filmmaker Georges Méliès (a mesmerizing Ben Kingsley). Scorsese’s passion for the material radiates from every single exquisite, affectionately-assembled frame, and in its themes of illusion and fantasy, the importance of film preservation and art’s ability to unite people of all ages and backgrounds. There’s such an abundance of charming pleasures to be uncovered in “Hugo,” from the audacious cinematography and striking art direction, to the sweet performances and stunning advancement of 3D as a storytelling tool. It transcends mere movie-making and becomes something else entirely: magic.

4)  Shame – Steve McQueen’s second directorial effort is a profoundly uncomfortable, wrenching experience that I’ve yet to shake. A harrowing portrait of one man’s bleak descent into loathsome excess, Shame traces the day-to-day life of a dashing New York professional, portrayed by 2011 MVP Michael Fassbender, who, after his disturbed sister (a brittle Carey Mulligan) reappears, attempts to escape his deep-seated anguish by surrendering, body and soul, to self-destructive sex addiction. Shame is uncompromising and often shocking in content – depicting its protagonist’s sad behaviour in cold, clinical detail – but McQueen never fails to generate raw honesty and breath-taking passages of visual artistry from the sordid squalor. This cinematic downward spiral is as magnificent as it is ugly. 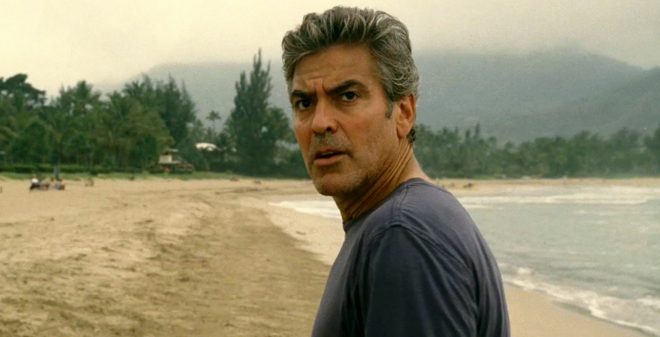 5)  The Descendants –  Rarely has a family unit felt as authentic and relatable as in Alexander Payne’s droll, observant study of a dysfunctional Hawaiian clan blindly navigating their way through the grieving process. George Clooney, in amusing dorky dad mode, hits a career high as a loving, but distant, father who reconnects with his kids while preparing for his wife’s untimely death, while Shailene Woodley, as his rebellious oldest daughter and confident, is a true discovery. “The Descendants” is relaxed and delightful, content to show us flawed, decent people trying their darnedest to do right by those closest to them. It’s the kind of breezily endearing low-key gem you almost wish wouldn’t end, if only so you didn’t have to bid farewell to its enchanting cast of fully-realized characters.

6)  Drive – Danish director Nicolas Winding Refn’s visceral neo-noir tribute to vintage cinematic cool is an invigorating blast of slick, attitude-drenched style. With brooding, toothpick-chomping driver-for-hire Ryan Gosling sitting intently at the wheel, and stellar supporting players Carey Mulligan, Oscar Isaac, Bryan Cranston, Christina Hendricks, Ron Perlman and an unsettlingly shark-like Albert Brooks adding dimension to the requisite stock roles, Drive adds a dazzling, flavourful dash of art-house meticulousness to an oft-rehashed B-movie chestnut of a plot. Backed by a propulsive, insanely catchy soundtrack, Refn’s picture doesn’t simply riff on beloved old Hollywood clichés; it lovingly reassembles the parts into something new, alive and visionary. The result is a picture that has one foot planted firmly in the past and the other in a bold, electric future.

7)  X-Men: First Class – This is one movie that really shouldn’t have worked. A questionable venture at prequelizing a series that petered out of creative gas in 2002, the picture was rushed through production without a finished script in 11 head-spinning months in order to meet its release date. Against all odds, wiz director Matthew Vaughn – coming off 2010’s sneering superhero triumph Kick-Ass – delivers a thrilling James Bond-influenced adventure yarn with serious dramatic oomph! The picture not only pumps new blood into the brand, it actually ranks as the very best of the X-Men pictures; as vital, fun and inventive as a beloved Chris Claremont-era panneled page-turner. Populated by a cast of colourful, compelling mutants led by James McAvoy’s groovy, well-intentioned Professor X and Michael Fassbender’s tragic, seething Magneto, and drawing boundless inspiration from its 1960s Cold War setting, First Class is a pure popcorn rush that merrily lives up to its own cheeky title.

9)  Warrior –  This rousing MMA family drama was one of the year’s most welcome, fist-pumping surprises. Starring heavy-hitting up-and-comers Joel Edgerton and Tom Hardy as over-burdened blue collar brothers working out their demons in the ring, Warrior is the rare sports film that knows how to make its well-worn genre tropes feel bracing and impactful. Loaded with exhilarating martial arts action sequences and nuanced performances (especially by Nick Nolte as the clan’s recovering alcoholic patriarch), Gavin O’Connor’s modern day Rocky skilfully builds suspense by setting genuine emotional stakes and never making the climax seem like a foregone conclusion. By the time the final blow is landed, and the fractured family’s tumultuous trip towards reconciliation reaches an explosive, cathartic end, Warrior nearly has us on our feet in rapturous applause.

10)  Melancholia – Whereas The Tree of Life astonished us with the explosive origin of the Earth, Melancholia sees controversial director Lars Von Trier wiping it out of existence in gloriously operatic splendour. A haunting, sad and sometimes darkly humorous examination of crippling depression, this elegantly assembled drama casts Charlotte Gainsbourg and an ethereal Kirsten Dunst as a pair of strained sisters grappling with insurmountable mental illness, as well as the impending apocalypse. Never succumbing to overly-morose stabs at misery exploitation, the always unconventional Von Trier has made a film that dives unwaveringly into the darkest depths of mortal despair, yet still manages to find beautiful, sweet release and a tiny, shining sliver of undying hope.