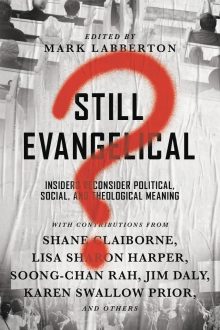 I am evangelical because of the role evangelicalism had in advancing freedom and equality for all people.

In his Thoughts upon Slavery, John Wesley boldly declared, “Liberty is the right of every human creature, as soon as he breathes the vital air; and no human law can deprive him of that right which he derives from the law of nature.” It’s not that Christianity promises believers good things such as freedom and equality. By no means. But inasmuch as Christianity aligns with the nature of the created order and the supernatural revelation of God to his people, then the promotion of that good news to all people (that is, evangelism) and the application of those truths (activism) advances the flourishing of God’s creation even amid its fallenness.

While we who live in the latter years of modernity can see more clearly the dangers that accompany too much emphasis on the individual and subjectivity (culminating as they now have into a deadly embrace of radical autonomy), the gift of liberty cultivated by evangelicalism far outweighs the risks that accompany it. Responsibility comes with freedom, so the elevation of the individual is accompanied by a corresponding need to hold freedom in balance with a proper understanding of humans as social beings who live in community. We can see this point better now, from our vantage point within late modernity, as the pendulum swings away from too much emphasis on individualism.

Yet even as we correct for one extreme, we dare not forget that the emphasis the early evangelicals placed on each individual arose from their good and true belief in the equal worth and dignity of each human soul. Richardson, the eighteenth-century English novelist mentioned above, helped to advance this evangelical notion of equality in his hugely popular works. In his first novel, Pamela; or, Virtue Rewarded, the titular character, a lowborn servant girl, has the audacity to declare (in defense of her stolid resistance of her master’s sexual advances), “O Sir! my soul is of equal Importance with the Soul of a Princess; though my Quality is inferior to that of the meanest Slave.” The fictional Pamela’s words are uttered within the context of sexual and bodily integrity, but her plight as an utterly powerless servant girl hounded and harassed by her wealthy master is not unlike that of the slave. While Wesley sought freedom for African slaves, Richardson advanced the freedom of individual autonomy, both in general and within the context of marriage.

Marriage is another area that evangelicalism profoundly shaped. Evangelicals, and the early novelists who believed in evangelical principles, advanced a vision of marriage as an institution designed to enable both husband and wife to serve in Christian ministry both within the home and without. This understanding transformed the institution of marriage from one based on political and economic expediency (the joining of ancestral lineages or landholdings) to one based on personal suitability.

Evangelicals called this the companionate marriage, a union of the couple’s choosing rather than the parents’ based on mutual compatibility in order that both partners might better fulfill the callings of their earthly ministry. Some of the most important early novels dealt directly with the marriage question, challenging with their marriage plots the old narrative, which upheld marriage as strictly a financial transaction that required parental approval (and often arrangement). Under the influence of evangelical ideas, eighteenth- and nineteenth-century novels helped revolutionize the social imaginary concerning marriage.

The reforming spirit doing battle with slavery, which persisted over several decades, was expansive enough to address numerous other issues as well. The evangelical abolitionists sought and enacted reforms in education, child labor, animal welfare, and other social arenas. Such activism inadvertently carved out new spaces for women, too, and ultimately the evangelical movement increased the authority of women to speak on matters of moral, social, and religious concern, granting women greater roles in public life as evangelicals sought to advance the public good.

Some of those quitting evangelicalism today do so, seemingly, from embarrassment and shame over the way evangelicalism looks today reflected in the distorted glass held up by media and poorly designed polls. A greater understanding of evangelicalism’s history—and its fruit yet to come from that history— renders such a view as misguided and shortsighted. While some fields fall fallow now and then, the rich soil of evangelicalism is, I firmly believe, yet fertile.

Excerpted from an essay by Karen Swallow Prior in  Still Evangelical. Copyright (c) 2018 by Mark A. Labberton. Published by InterVarsity Press, Downers Grove, IL. www.ivpress.com