E.V. Hill, that old African-American evangelist-preacher told a story about a little old lady who sat at the front row of his church. When he’d get up and preach about all of the things that were wrong in the world, this lady would say, “Get to the good news.” He would preach about injustice and oppression, and she would murmur to herself, “Get to the good news, Pastor.” He would talk about what happened on Good Friday on that old rugged cross, and she would say, “Get to the good news.” So when he would get to talking about Sunday when Jesus rose from the dead, she would stand up and shout, “Now that’s it! Preach that, preacher!”

The good news is that we have a God who loves us even when we’re full of wickedness. It’s a message that says even a wicked people can repent. I think that all the bad news we hear all around us and read in the newspapers is a beautiful opportunity for the church to shine. This is what is happening in the Gospel story. The times were bad. John the Baptist just got put in jail. But in verse 14 it says that after John was put in prison, Jesus preached the good news that “the kingdom of God is near” all over the town. That seems a little odd to me. I wonder how I’d feel if I got locked up and all my community mates would go out on the streets, singing, “This is the day that the Lord has made!” But you see, Jesus knew the end of the story; it’s almost as if Jesus was laughing at Herod, because he knew in the end that mercy will triumph, that God will triumph. It’s no coincidence, I think, that the first folks to leave everything to follow Jesus were the marginalized: teenagers, prostitutes, fishermen. Rome’s dream had failed them. They wanted something more to live for, or die for. The first folks to die for Jesus were people who had nothing else to lose except for the heavy yoke that Rome had laid on their backs.

Indeed the good news is good news to the poor. But it spreads beyond that too; it can even reach kings and presidents. I remember reading Gandhi where he wrote about his movement [of peace and simplicity] and he said, “We knew that something was happening when not only were the folks on the streets wearing homespun clothes that they had made with their own hands, but there were also members in parliament that were making their own clothes.”

The movement of Jesus of building a new society in the shell of the old one was spreading all over the land because the good news is a call to liberation for the oppressed and the oppressors. It’s a call to leave everything and be set free from the meaningless toil and lifeless routine that we fill our days with. God is saving us from ourselves. God is liberating us from our possessions that have come to possess us. And we find perfect joy not by keeping all the stuff but by giving it all away.

I met this one kid in India when I was there working with Mother Theresa and the sisters. We would throw these street parties for the kids that were beggars on the street. One day it was the birthday of one of the kids I had grown really close to. It was about 100 degrees, so I’m thinking, “What should I get him for his birthday?” And I thought, “What better than an ice cream cone?”

So I got this kid an ice cream and I took it to him. I had no idea if he had ever had ice cream before, because he just stared at it and shook with excitement. And then his instinct was that, “This is too good to keep to myself.” So he immediately yelled to the other kids, “We’ve got ice cream! Everybody gets a lick.” He lined them up and went down the line saying, “Your turn. Your turn.” Then he got full circle back to me and he says, “Shane, you get a lick too.” I got this whole spit-phobia thing going on, so I kind of faked a lick and said, “Hmm, that’s so good.”

But that kid knew the secret. He knew the secret that the best thing to do with the best things in life is to give them away. That flies in the face of so much that we hear in our culture and even in the church with this self-centered, blessing-obsessed gospel of prosperity that’s about what we can get from God. And if we’re not careful, we can lose the secret of God’s liberation, which is, if you want to find your life you have to give it away.

It’s a lesson on how to look at things that I’ve learned from our neighbors in North Philadelphia. I live in one of the most economically devastated neighborhoods. We have 20,000 abandoned houses, and yet we have 3,000 families that are waiting for housing. We have 700 abandoned factories; it’s just an industrial wasteland. About a year and a half ago, one of those abandoned factories caught on fire. It spread into our neighborhood and it burnt down all of our homes – the home where I was living, the community center, and about a dozen other houses. It displaced about 100 families.

I can remember, as it happened, there was this incredible thing called community that just burst out of the struggle. The Red Cross had set up a shelter nearby, but then the workers said, “The weirdest thing happened. Nobody stayed in the shelter because everyone in neighborhood opened their homes up.”

I remember asking one of my neighbors, “How are you doing?” He said, “Pretty good actually. The greatest thing happened last night. For the first time I could see the moon because the factory had burnt down.” I thought, “What a strange way of thinking of this.” My friend actually made a mural of it. It has this guy looking at his house as it’s almost burnt to the ground. The moon is behind it and there’s a little caption that says, “Boy, isn’t the moon beautiful?”

I think it’s that kind of freedom that teaches us to live as if none of this stuff around us even existed, to live as if the world around us is fading away and won’t last. It’s this call to know that there’s something deeper at the core of everything and this is the call to liberation. I find it funny when people see that we’ve left a lot of this stuff to follow Jesus and they say, “Oh it’s so heroic you take a vow of simplicity.” And I say, “You must have never seen the pearl that we left everything for” (Matt 13:45). We said “No” to some things, but we said, “Yes” to something so dazzling and so beautiful that it makes all the other stuff look like dung.

I love that story in Revelation about the fall of Babylon (Rev 18). Revelation says there were two responses to the fall. There was the response of the merchants who looked up and wept and beat their chests and said, “Oh, how could great Babylon fall?” And then there was the response of the angels. It says the angels rejoiced and said, “Fallen, fallen is the great whore, Babylon.” And maybe the big question for us is, “Are we weeping with the merchants or laughing with the angels today?”

In my neighborhood, I’ve learned to laugh. I think that poor folks get it because they can rejoice when the world around us seems to be falling apart. They’re not too stunned when kings or presidents fail us because they’ve never had much faith in caesars. The poor can laugh when Babylon falls because they know that the New Jerusalem is coming. They can laugh when markets collapse because they know their providence comes from God. And like the lilies and the sparrows, they have the freedom; they’ve never really trusted in a 401K, or a 201K now. There’s that freedom that, “We’re just praying for our daily bread.”

One of my neighbors said, “Oh we’re going to make it through. God is still good. And besides, my people have been in a recession for a few hundred years.” It’s with that freedom that we say, “Our hope today does not lie on Wall Street, our hope doesn’t rest in America; our hope does not come from a new caesar or even a new president, even a good one. Our hope today is built on nothing less than Jesus’ blood and righteousness. On Christ the solid rock we stand. All other ground is sinking sand.”

Indeed as we look around, all other ground is sinking sand, but Christ will live forever. In the name of the Father, Son, and the Holy Spirit, amen.

Published with permission from The Simple Way. Shane Claiborne will be the Keynote Speaker at Missions Fest Vancouver January 27 & 28 2012 as well as Missions Fest Halifax in March. 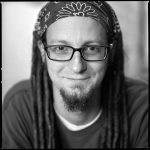 Shane writes and travels extensively speaking about peacemaking, social justice, and Jesus. He is the author of the several books including The Irresistible Revolution, Jesus for President, and Becoming the Answer to Our Prayers. Shane speaks over 100 times a year in a dozen or so countries and nearly every state in the US. His work has been featured in everything from Fox News and the Wall Street Journal to CNN and National Public Radio.