Wounds from a friend can be trusted, but an enemy multiplies kisses. (Proverbs 27.6)

Recently, I was helping my sister babysit a couple of kids.

We built towers and walls out of cardboard blocks, which was fun.

Then we shot Nerf guns at them until they collapsed. That was more fun.

Jumping in piles of leaves, breaking a finish line tape, smashing water balloons on a hot day, making tracks across a blanket of snow–destroying things can be awesome. There’s a sensory pleasure to it–think of the sound when an autumn leaf crunches under your shoe. There’s also a deep inner satisfaction, the kind we always get from exerting dominance, made righteously exquisite by the knowledge that these are things that ought to be destroyed.

I’m saying all this because I’m only just now unwinding the mindset that a destructive impulse is inherently wrong. Some things are have to be destroyed, so that new things can be built in their place. If it’s right that they be broken, what’s wrong with enjoying the process?

All this thought on the nature of breaking and destroying came from a couple of back-to-back instances where I intentionally did something that proved unintentionally hurtful to someone else. That was less remarkable to me than the violent, scared-animal response that I had when I found out I’d inflicted this hurt. Inside, I was viciously pointing the finger back at them:

“Why didn’t you warn me you were vulnerable that way?

“If I’d known you cared what I thought, I’d have been more careful!”

“I didn’t know I had the power to hurt you; you shouldn’t have given it to me!”

Weird, right? Finding out that I hurt them accidentally made me want to hurt them on purpose.

In my second year of college, newly coupled with my first-ever boyfriend, I remember this thought, that sailed through my head like a paper airplane:

“God, when we break up, please let him break up with me, because I would hate to hurt someone that much.”

My prayer was answered. And it took the rest of the semester, and a summer in Paris, to rinse away the gall I accumulated after months of submitting to his condescension, his high maintenance ways, his embarrassing degree of self-assurance, and, finally, the pressure of his hand over mine as he informed me that he wasn’t what I needed.

If I’d gotten to the breakup before him, I’m sure it would have hurt him. Probably not in the same way it hurt me, but still. It was a hurt that needed to happen, because the relationship needed to end. And I chose to let him do the honors.

For days afterward, he went around asking my friends how I was doing; when they answered, he would sigh, “She’s such a Christian saint.”

Hearing that he said this, my perspective finally turned right side up. My doormat behavior hadn’t been an act of faith or love or compassion, and I resented anyone thinking so.

Yeah, God calls us to love others as we love ourselves. But I think a misunderstanding of that Scripture is part of how I get this hurting business twisted. I myself have no interest in being hurt, even if it would be beneficial for me.

The other part is human nature. We all do what we can to avoid being hurt by others. Some people avoid being hurt by hurting first–a preemptive strike, if you will. Others rely on their ability to adapt, submit, and please, in order to cut hurt off at the pass.

Choosing to avoid hurting someone is not always an act of Christian virtue. Sometimes–more often than I like admitting–it’s just a way to get what I want.

The older I get, the more I connect with this raging energy inside me to break things. A doctor once told me I’m a high-testosterone girl, but I think it’s a little more than that. God commanded man to “fill the earth and subdue it;” to me, at least, this suggests that there were things, even in the garden, that wanted to be disrupted or disarranged so that order could be built.

Maybe that’s a stretch. Let’s stick to the world as it is now…and, as we are so often reminded, it is “a broken world.” When things get broken, sometimes they “heal” in a way that isn’t healing at all, that ends up crippling them and shortening their life. It’s true of trees, bones, and human minds. If these things are going to actually heal, and live as long and as well as they were made to, they first have to get broken again.

Is it wrong for a doctor to enjoy this process? To take delight in exerting his expert destructive power where it’s needed?

Maybe not. But few of his patients are going to like him much, while he’s snapping their finger in the very place they thought had recovered. 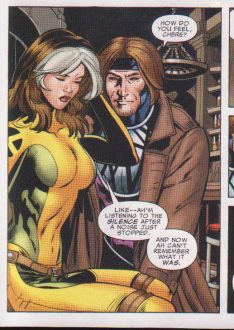 This brings me to the X-Men.

Sorry, I really like the X-Men. I like them precisely for the reason that I’m mentioning them here. They are a collection of people with enormous power to harm the world around them, who have come together to learn how to use their destructive power for good. Good citizens are still afraid and suspicious of them, but the X-Men don’t let that stop them from saving good citizens’ lives.

(They do tend to mope around a lot on their off-hours, however, which creates a lot of in-house drama. But I digress.)

If the Marvel Comics illustration isn’t doing it for you, try this one from real life.

A couple years ago, I had a conversation with a Christian musician, who is notorious for his agit-prop messages. He said he had discovered, early in life, that he was gifted as a provocateur. As a Christian, his prayer was not to suppress this part of his personality, but to seek God’s direction for how to use it. There are, he said, things worth agitating against.

It’s hard enough to be brave for the sake of faith, and do things with no certain outcome. It’s harder still when people don’t understand, or blame you, or punish you, because your act of faith hurt them.

It’s a tricky proposition, to learn how to break things and hurt people in the right way. I haven’t figured it out, but I spend a lot of time trying to.

Here are a few things that have occurred to me, as I watch the shrapnel fly.

God gives us gifts, of talent and personality and focus, to use with freedom and love in the world.

I think that hurt nearly always results from forgetting one of these elements of its use. We take freedom to mean impunity, a license to do whatever we want without responsibility. Or we confuse love with inoffensiveness, and never let love’s real power off the leash.

You won’t always hurt people the right way; sometimes, you will do it very poorly. When that happens, you should ask forgiveness. But you shouldn’t necessarily apologize. Sometimes–many times, I think–it’s better to be hurt clumsily than not to be hurt at all. I’ve grown a lot from the wounds of people who never came back for forgiveness.

Martin Luther said that when it comes to sanctification, we’re all like a drunk man trying to ride a donkey–we’ll always fall off on one side or the other.

Improper use of freedom will impair the love that God calls us to have for each other.

But improper use of love will impair your freedom to do what God put you in the world to do.