What the “Christian masculinity” movement keeps getting wrong.

The Church has been inundated recently with a glut of books and articles on what it means to be a Christian man. But while we should think holistically about our identities — including gender roles — it is unfortunate so much of the material glorifies what can only be called “macho” Christianity. The standard tenet of the movement is simple: “God calls men to be warriors.” The problem is that this tenant draws more on society’s understanding of masculinity than it does the scriptural witness.

Not that this is a new idea. Contemporary discussions of masculinity in the church stem from the “muscular Christianity” movement of the 19th century. As society began to embrace a more macho understanding of masculinity, Christian men feared they were losing face. That fear led Thomas Hughes in 1880 to lament the apparent “want of manliness” among Christian men. People were beginning to believe, he said, “that this weakness is inherent in our English religion; that our Christianity does appeal and must appeal habitually and mainly to men’s fears — to that in them which is timid and shrinking, rather than to that which is courageous and outspoken.”

The answer, Hughes argued, was for men to rediscover true Christian masculinity: “The conscience of every man recognizes courage as the foundation of manliness,” he wrote, “and manliness as the perfection of human character.” Should Christian men repress this innate masculinity, he feared, then “Christianity will go to the wall.”

The words reflect the growing opinion of his day that Christian men must embrace a manly faith or face ridicule from the world around them. The modern fascination with masculine Christianity was underway, and its central thrust was that real Christian men ought to be warriors.

The fact that the Christian masculinity movement arose more because of a changing definition of masculinity in the 19th century than through a faithful rereading of the Scriptures does not, of course, mean all of its conclusions are wrong. Men should be concerned with developing and maintaining a healthy lifestyle — with loving the Lord our God with our bodies in addition to our hearts, souls, and minds. But there is something seriously wrong with the cookie-cutter approach taken by much of the masculinity movement.

If you are man, the authors say, then you are called by God to be first and foremost a soldier. Be it Wild at Heart’s suggestion that, “in the heart of all men, there is a desperate desire for a battle to fight,” or a more recent Converge article’s suggestion that mixed martial arts is a healthy expression of man’s God-given fighter-instinct, the same underlying assumption remains: men are created to be warriors. And that — pardon my bluntness — is just plain wrong.

The “warrior” cannot be our fundamental identity. After all, the biblical concept of battle is one primarily of response to outward aggression: a shepherd boy becomes a warrior after the Philistines invade; the Israelites are oppressed and then a Judge rises to protect them. Even when God sends the Hebrews to claim the land promised to their ancestors, it is clear these people are not warriors by birth. They were born slaves; they have to learn the art of warfare.

The great heroes of the Bible become warriors because the situation demands it, not because it is somehow part of man’s innate nature. Any man can become a warrior if necessary, and, indeed, it sometimes is necessary. But it is not what he was created to be. It is not the core of his masculinity. It is not, for that matter, something limited to men; Deborah, too, was a warrior. But being a warrior should never be the ultimate goal. The Scriptures are clear that the opposite is true: at the end of things, “nation shall not lift up sword against nation, neither shall they learn war anymore” (Isaiah 2:4).

To see God’s original plan for men, look to a time before sin necessitated the warrior role. Begin with Adam — and note carefully, dear readers, when God created man, he created him to be a gardener, not a warrior. Hardly the great hero of the Christian masculinity movement.

What kind of man did God create Adam to be? We know, of course, that God made this gardener in his own image. But what does that mean? For one thing, it includes the idea of creativity. Just as God created and filled the universe with wondrous things, so too He commands man to “fill the earth.” There’s a reason we call sex “procreation” — it is the act of “creating forth,” and in some small way, it imitates the creative activity of God. 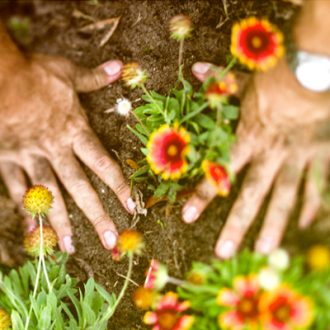 Man was also called from the beginning to “subdue” the earth. This reflects God’s identity as ruler. As God rules over all creation, humanity is also called to bear authority over the world. But just as God governs his creation with good — indeed, “very good” — intentions, we must also govern wisely. Adam is to be a caring gardener-king, not a tyrant.

Of course, these two commands to fill the earth and subdue it are given not only to men, but to women as well: “male and female he created them,” after all. But things fall apart when sin enters the world. Men are suddenly told that they shall bring forth food through hard work and toil. While nothing prevents a woman from aiding her husband in that work (such partnership and companionship were the impetus of her creation), ultimate responsibility for getting it done now falls on the man. The carefree gardener has become the care-full provider, supporting his wife and his family through arduous labour.

That responsibility to care for family is explained more fully in Paul’s letter to the Ephesians, where he wrote that “the husband is the head of the wife even as Christ is the head of the church” (5:23). While Scripture may delegate the role of spiritual headship to men, that does not give men carte blanche to act tyrannically. We are called to lead, Paul writes, as Christ led. So how did Christ lead? And what does that tell us about what it means to be a Christian man?

The answer is as simple as it is humbling: “Husbands, love your wives, as Christ loved the church and gave himself up for her” (Eph. 5:25). The great leadership men are called to exercise in the family (and, by extension, the church and society) is one of sacrifice. We are to put wife and child before ourselves. We are to give up everything — even our lives — to ensure they are provided for in their physical and spiritual needs.

As we do so, we must bear in mind who we truly are as Christian men: sinners. We cannot, as Christian men, lead others until we recognize that, of our own strength, we are unfit to lead. But even though we are insufficient to the task, God has called us to it and He is capable of working through us, despite our brokenness. We need His mercy when we exercise servant leadership, just as much as we need it in every other part of life.

We are called, like Adam, to be gardeners, not warriors. We are to be diligent labourers, patiently undertaking the hard work of cultivating and caring for our families, churches, and communities. We are called, like Christ, to lay down our lives for our brides, sacrificing our own needs and desires for theirs. This is the biblical model of manhood — not drawing the sword at every opportunity (for those who live by the sword will die by the sword), but instead, supporting our wives, children, and communities “by the sweat of our faces” up to, and including, the point at which that sweat becomes “great drops of blood falling down to the ground.”

Do you want to know how you should live as a Christian man? Love the Lord your God and immerse yourself in His Word. If you are married, care for your wife and children. If you are single, serve your neighbours. For this is what it means to be a Christian man: to recognize that you are a sinner, forgiven by God, and then to live a life of service. You do not need to be “wild at heart;” our hearts are wild enough with sin already. No, our hearts need to be tamed by the blood of Christ. Then, having been loved and forgiven by God, we can begin the hard work of loving and serving others through his strength.

So lay down the sword of the masculinity movement and pick up the plow of biblical Christianity. Yes, in expectation of the great promise of God’s kingdom, let us “beat our swords into plowshares and our spears into pruning hooks” (Isaiah 2:4) — for God has not called men to be warriors but gardeners.